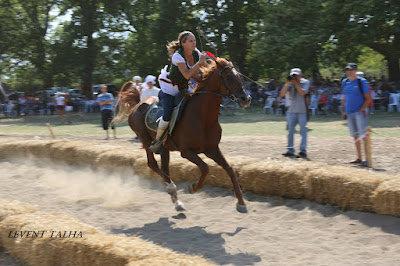 I promised to write a short report of my adventure in Turkey and I decided to write it with my crappy English, so let's start!

I have been practicing horseback archery only for one year now, but I have already had four competitions this year. This was the 4th one. First was in Balikesir Turkey, next one in Kordan Iran and third in my country Finland where I did actually very poor results :D Ironic isn't it. Well, this time I went to Biga Turkey. I was waiting for it so much since I already enjoyed greatly my first event in Balikesir and made a lot of new warrior brother friends in there. Also we have had historically cold summer here in Finland so I waited to see the sun and feel the warm wind! Oh well that apparently happened. It was quite hot. After landing to Ataturk I took a ferry from Istanbul Yenikapi to Bendirma with Ali's Iranian team and we travelled from there to Biga by charter bus. It was already late evening when we arrived to the hotel, which was really nice by the way, so I just went to sleep after saying hello to people already arrived. Next day was Friday, and day for practising and choosing horses. After a good breakfast and some social mingling we went to see the horses and started training. My horse was an arabian stallion like most of the horses, approximately 10-12 years old, and had a lots of experience. His name was Koraj and he looked a bit grumpy. He was a nice and safe horse to ride, only thing was that he tried to attack other horses if they would come too close. In the track he was a bit slow for my taste but at least very safe which I think is the most important thing at this phase of my training. I rather have some penalties due time than end up not being able to nock and shoot at too fast speed.

After practicing we had time to get to know each other and I met really fantastic people and had super conversations. In the evening all of us went to a big dinner party, there was drummers and red carpet and everything, omg. The view was just amazing; we could see the mountains and there was a natural firework show for us as some lightnings were blazing over the mountains. Luckily the storm stayed there and did not come to pour on us. 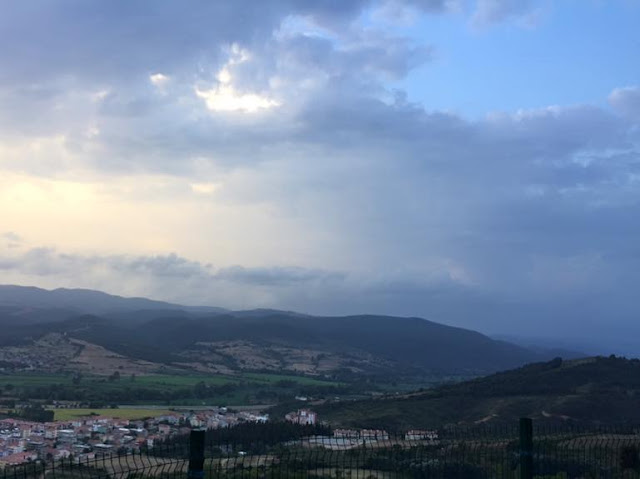 Saturday was the competition day. There was a lot of people from many countries all over the world; at the same time there was a big competition for ground archers. We had about 50 competitors in Horseback Archery, which was less than last year in Biga due to some changes in the organizer but it was very nice anyway. There were HBA competitors from Turkey, Germany, Iran, Romania, USA, Russia, Poland... just great! And of course me from Finland, haha. This time we had more lady competitors too, which was nice.

First competition was Mamluk style. Originally we had 3 targets in a 100 meter track; first one right after the start to the right, then one in left side backwards and last one left sideways and a bit more far away. Time limit was 10 seconds, and after each second after that, you get one penalty point. The targets were Turkish style. Second run of the competition was quite interesting my dear friend Ali shoot an arrow to the first target and missed - the arrow went right through the net behind it and hit somebody in the audience. Oh crap. Luckily it was not lethal or that bad just a flesh wound. The target was changed after this to the left side, so it was a bit easier. We started the competition again, and had another accident right away when Cemal Hunal's horse got scared of something and jumped sideways and tripped over the fence with his rider. Luckily the rider didn't broke any bones and the horse was ok, so they continued the competition. Thank God these were the only accidents this time in HBA, uh! 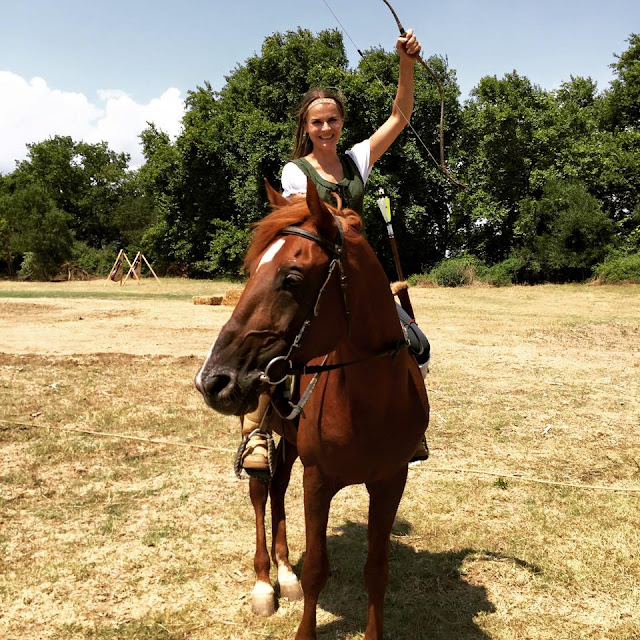 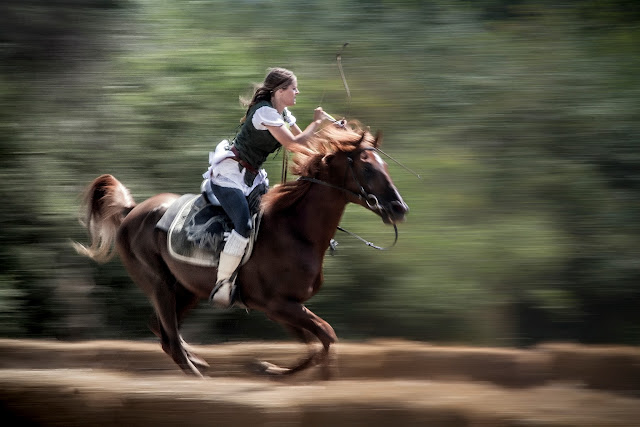 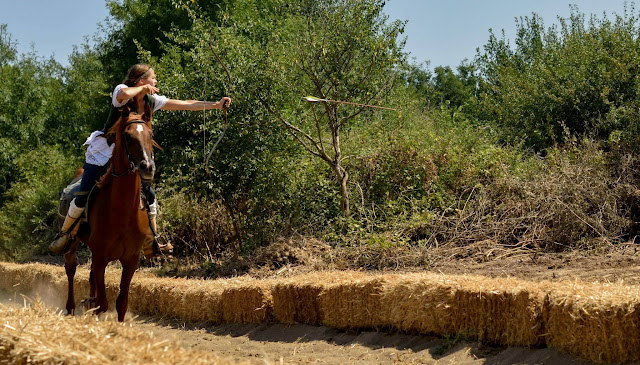 My first round was a disaster... Koraj was feeling sleepy and didn't want to leave the other horses and I tried to encourage him in the start and got tangled with the reins. Oh noes. I hit only one target at that round and my horse was so slow even I could have run faster. Well. I got a bit pissed off and really told him to run faster and next 2 rounds were actually quite nice! I managed to do it in 10 seconds and nock and shoot all three targets, unfortunately I missed the last one. Fourth round was ok but I did not hit all the targets again. Well I was quite happy anyway. There are so many parameters in competition situations. The horse, the audience, the photographers who like to jump and surprise you :D, the different targets, the equipment, weather, wind etc. We had big groups, 2 x 25 riders, so there was a lot of waiting for the horses and riders. I love it anyway and try to do my best! In the end results I ended up in 38/51, with all my penalty points from time I'm quite happy with it considering my lack of experience and me being a total rookie still among the much more experienced horseback archers.

In the afternoon we had Kabak. Time limit was again 10 seconds, and if you can hit the target above you but not make it in 10 sec it doesn't count. I didn't hit it but I was not the slowest one so I'm not very happy but not sad either :D Kabak is difficult and I don't have the possibility to practice it in my farm, but I will make some kind of target to train.

During the day I took a lot of pictures and there were a lot of pictures taken by me haha, and 2 interviews to the local tv channels. At the end of the day we went to have dinner together and had some tea with my friends, enjoyed traditional Turkish music and some very funny conversations. If laughter makes us live longer, that's what we just had. Super!

Sunday was the day for shows, price giving ceremonies etc. The weather was really hot and I was dead tired but I still had a lot of fun taking pictures and chatting with people. 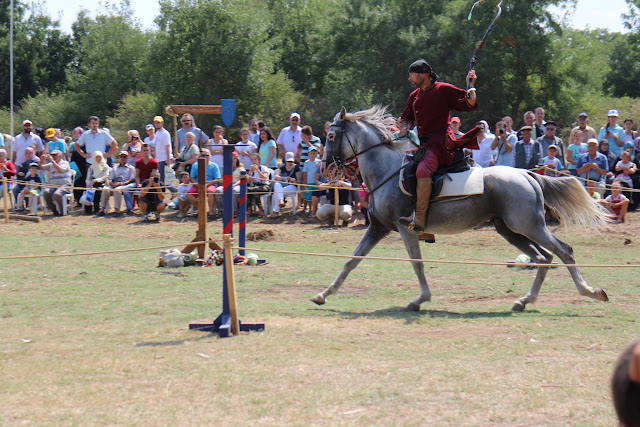 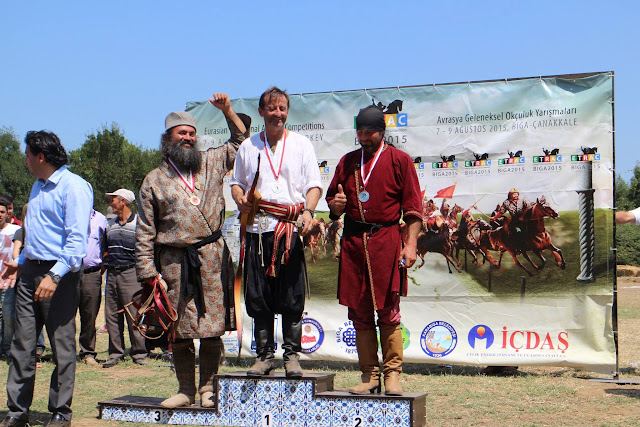 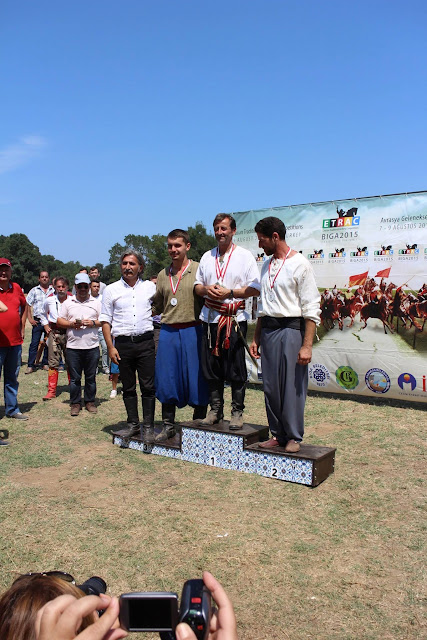 In the evening I returned with my friends to Istanbul by ferry boat again, and stayed there at my friend's place until Tuesday when I had my flight back to Finland. I actually managed to have 1,5 days of actual vacation! OMG! I so needed it. We went to a private museum to see all kind of fantastic gadgets and treasures from the very ancient history, it was a bliss really. We had also some nice time at the pool and partying, the Black Sea and good food and company. I'm so grateful for my hosts to take such good care of me, thank you thank you thank you! It was a pleasure.

I was supposed to write about horseback archery but I have to say something else too. I had so many conversations with so interesting people that I'm amazed. I was so fortuned to meet and have a talk with the very best horseback archers, I learned quite a lot just by watching and listening. I know I can be quite stupid with all my 5 languages but I still learn haha. I even met one person "by coincidence" in the airport on my way back, who with we had the most inspiring conversation. Nothing happens just "by coincidence", it seems that it's all planned, hah! Right persons at the right time, so to say. And when the student is ready, the teacher appears. It is just amazing.

The world is actually very small. We all face similar issues, hopes and fears. We are all humans. We all have our own path. The path of the horseback archer (of course all HBAs have their different own paths too) seems quite interesting and we all are hooked up in it for different reasons. The main reason seems still to be the great love for the horses, the love for the archery, and somehow the love for the funny international family we have.

I hope to see you soon again!

I wish you a nice day with these pictures.
Best wishes, Katariina Albrecht 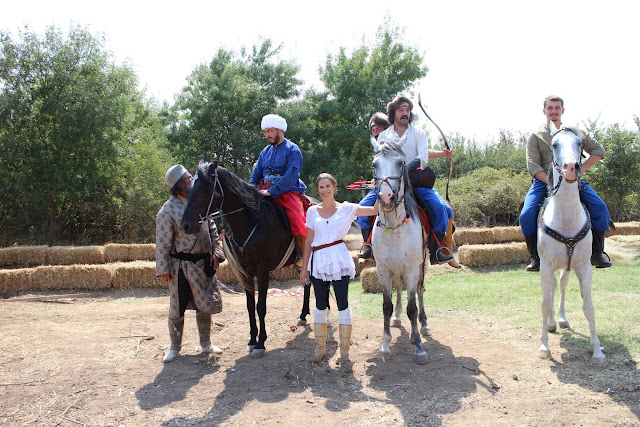 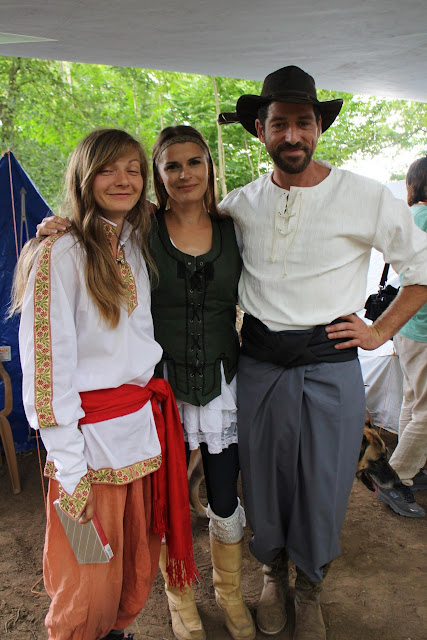 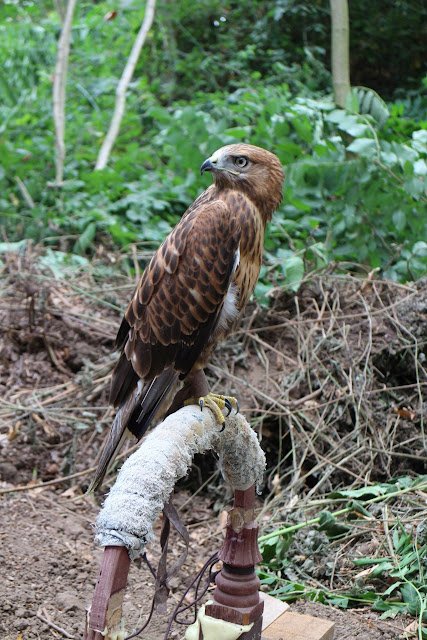 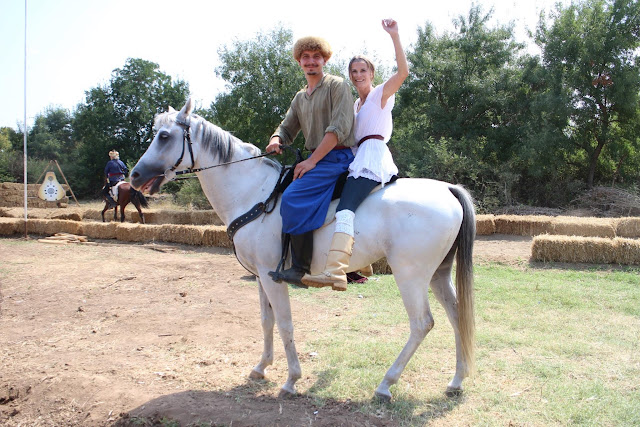 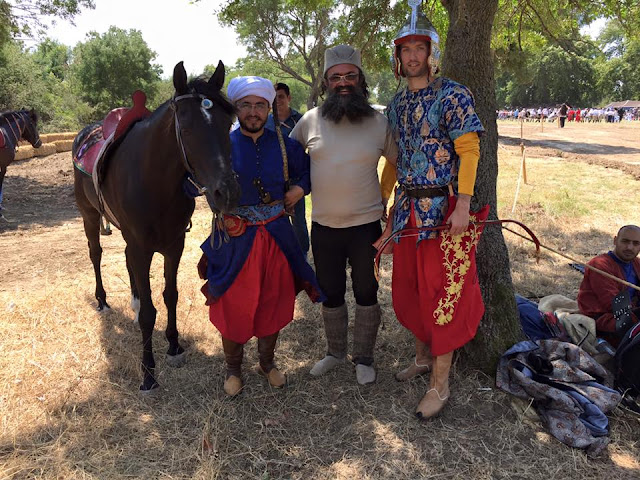 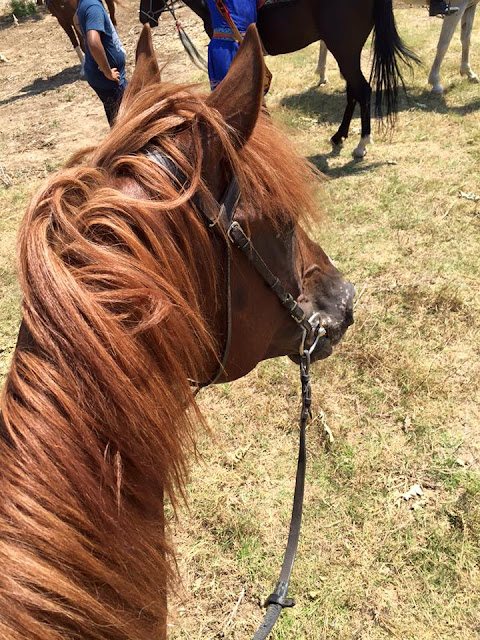 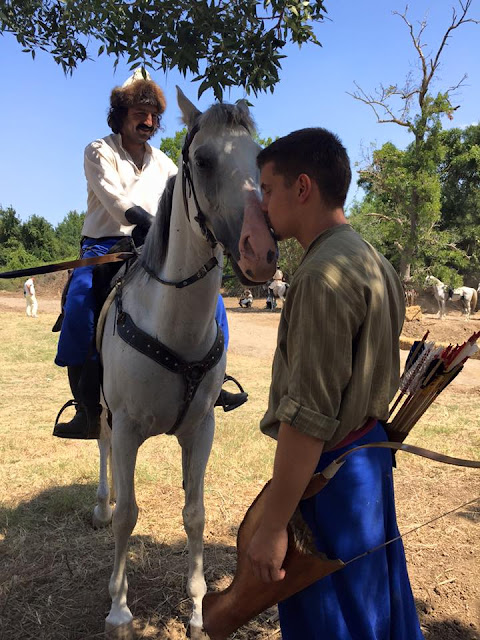 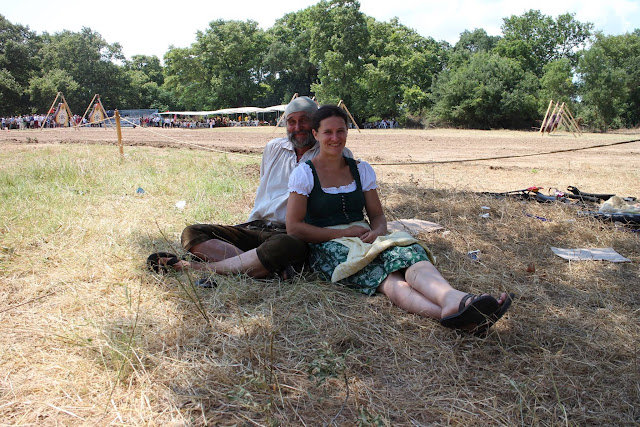 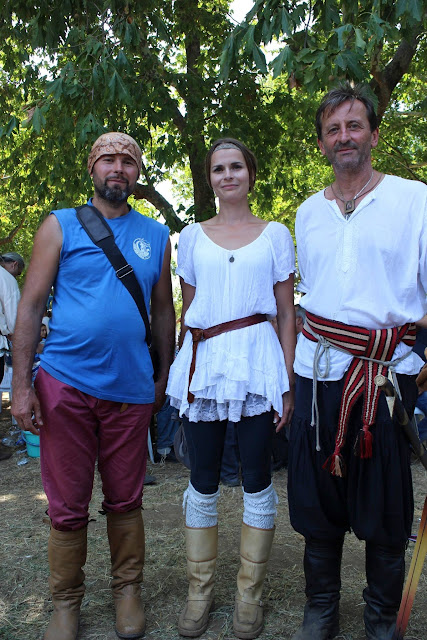 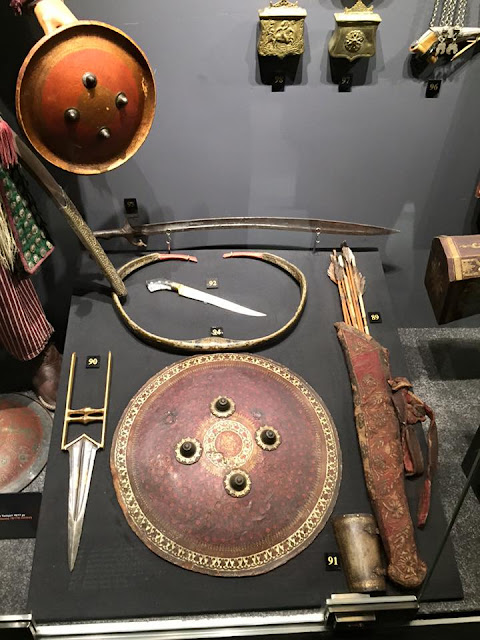 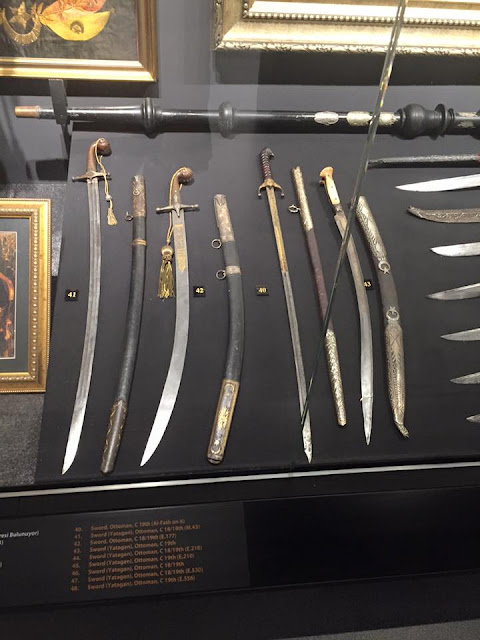 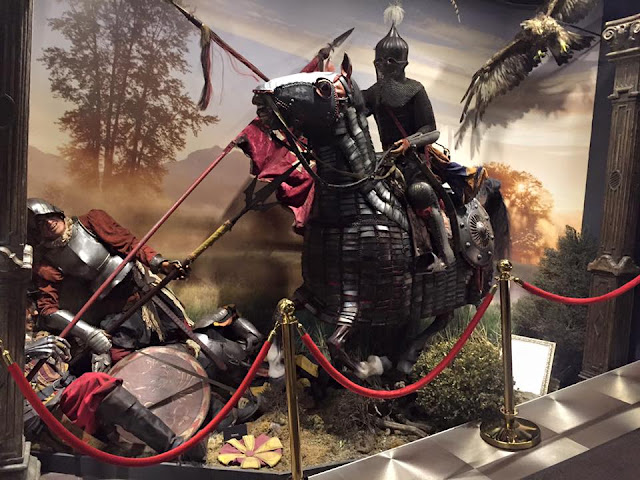 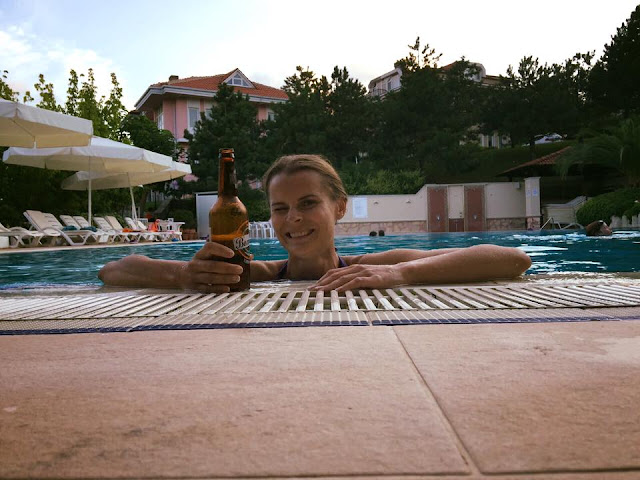 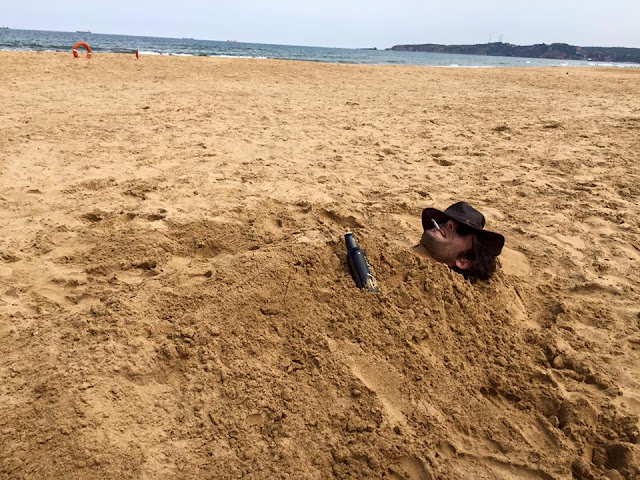 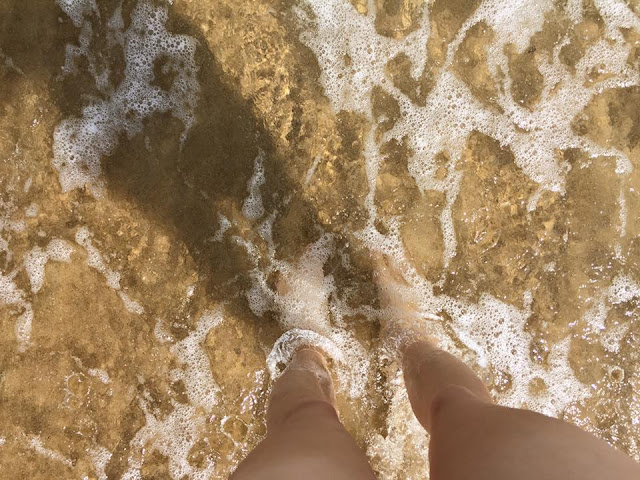